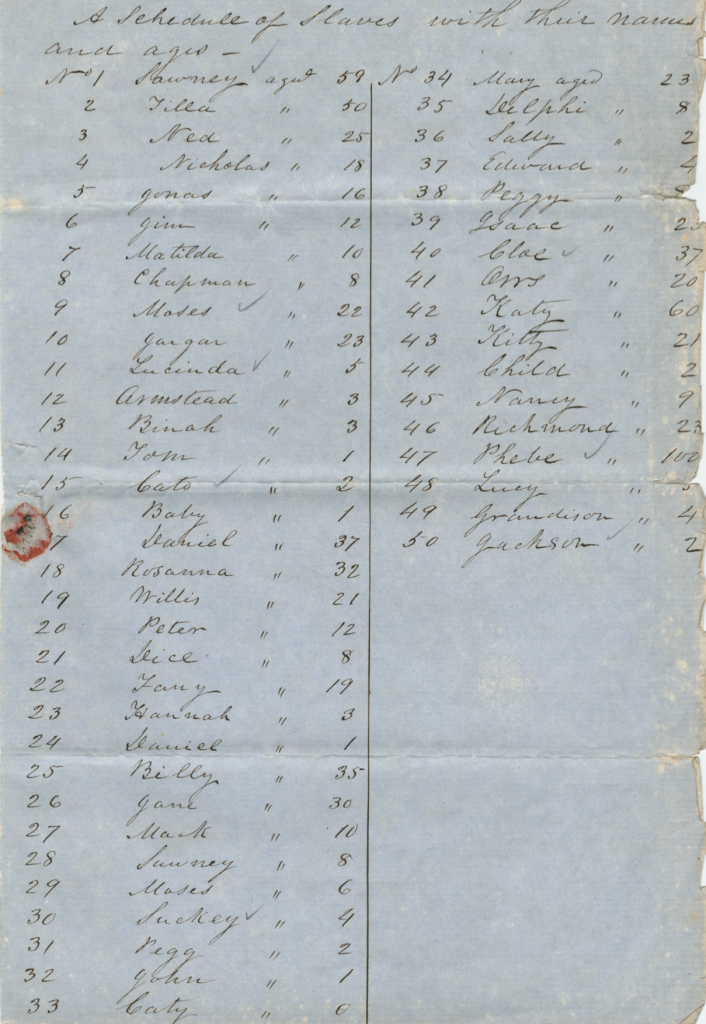 Stories of free and enslaved persons of African descent comprise Generation 1 of Call My Name. Telling these stories is ongoing work that involves looking at inventories of enslaved persons, photos, and other primary source documents and details from other sources. Clemson University was built on the Fort Hill Plantation, home to the Calhoun and Clemson families and at least 189 enslaved persons of African descent. For many of the enslaved persons whose names appear in the deed to Fort Hill from 1854, we have just that—a name. However, Call My Name has managed to tell the stories of a few of these individuals more fully, and we hope to be able to learn even more about their lives and their labor in the future. By doing so, Call My Name will not only expand our knowledge of enslaved persons of African descent at Fort Hill but also the individuals who enslaved them (the Calhoun-Clemson-Colhoun-Pickens family) and the structures and systems of oppression that were present in the antebellum South. However, the focal point of this story is always the people whose names are on the documents and the complex lives that each name represent.

It is important to acknowledge that the story of Fort Hill and the people who lived on it does not begin with American colonization. Prior to 1776, the land where John C. Calhoun established his plantation was the site of the Cherokee town of Esseneca. However, colonists burned the town to the ground and killed most of its the inhabitants in 1776. Eventually, the Army Corps of Engineers flooded part of the land that once made up the town of Esseneca during the creation of Lake Hartwell in the early 1960s. However, much of the land that once belonged to the Cherokees is still above the water line and currently belongs to the University.

Once the land came into the Calhoun family’s possession, they founded the Fort Hill Plantation in 1826 and used the labor of enslaved carpenters to enlarge the house and turn it into a 14-room mansion. During the nearly 25 years that John C. Calhoun lived on the plantation and the remaining fifteen years until the end of the Civil War, the enslaved persons owned by John C. Calhoun and his wife Floride, and their son Andrew Pickens “A.P.” Calhoun and their daughter Anna Calhoun Clemson labored on the land and in the house. Names of enslaved persons are referenced in numerous letters written by the Calhoun-Clemson family throughout the antebellum period. Other names of enslaved persons are included in an inventory of enslaved persons included in the deed when Floride Calhoun and her daughter Cornelia Calhoun sold the property to Andrew Calhoun in 1854. Still other names appear in the 1865 inventory of enslaved persons completed after Andrew Calhoun died in 1865. The enslaved included in these documents belie the depth of human experience and struggle that these individuals went through during their years at the plantation. Some individuals’ stories have resurfaced, telling bits and pieces of lives of hardship, exploitation, and resistance, but much remains to be learned and recovered. What follows are a few examples from the archive that provide a better, albeit incomplete, idea of what persons of African descent experienced while enslaved at Fort Hill during the nineteenth century.

Two enslaved persons named Polydore and Menemin appear in a New York Herald article from 1849 written by a journalist who visited Fort Hill. Menemin was reportedly 112 years old, and even though Polydore was already deceased in 1849, the two are reported to have had at least 63 of their descendants living on the plantation. Additionally, the article reports that they were “first-generation slaves from Africa,” which them in Africa in the eighteenth century when they were born. Their legacy lived on through their children, attested to by the article despite Call My Name’s current lack of information on their descendants.¹ Their story reflects the inter-generational nature of this project’s research, stretching back to Africa in the 1700s and before and reaching all the way to the present with their descendants.

Siblings, Issey and Sawney Jr. (often referred to as Little Sawney in letters written by the Calhoun-Clemson family), were both enslaved at Fort Hill during the nineteenth century. Their stories are representative of the lengths to which many enslaved people went to resist the oppressive conditions they were forced to live under. The two were children of an enslaved man named Sawney, Sr., otherwise known as Old Sawney. Sometime in the early 1840s, Sawney Jr. was accused by Floride Calhoun of trying to kill one of the plantation overseers by burning down his tent and throwing a stone at Thomas Green Clemson on a different occasion. As punishment for his acts of resistance, Little Sawney was sent to labor for Floride and John C. Calhoun’s son, Andrew Calhoun, at his plantation in the Canebrake in Alabama—a horrible turn of events for an enslaved person seeking escape.

Issey, Sawney Jr.’s sister, tried a similar tactic to her brother in her own act of resistance in 1843. In a letter to her son, Patrick Calhoun, Floride Calhoun wrote that Issey tried to burn the plantation house down by placing a hot coal beneath a feather pillow in one of the upstairs bedrooms. However, someone noticed the blaze and put it out before the fire spread. After being caught and accused of the act, Issey could have been hung, but her status as a favorite of Floride Calhoun’s daughter Cornelia Calhoun meant that she was instead sent to join Little Sawney on Andrew Calhoun’s plantation in Alabama.² The stories of Issey and Little Sawney Jr. illustrate the great lengths to which enslaved persons at Fort Hill would go to resist and fight their oppression, despite the grave consequences that might result from discovery and capture. Additionally, their stories contain an element of possible heartbreak and loss that would result from being separated from their family—the names of Old Sawney and his wife and children appear on the 1854 deed to Fort Hill, and there is no mention of Issey and Sawney Jr. at the plantation. The Calhouns, much like many other enslaving families at the time, were willing to separate enslaved families, possibly permanently.

These stories, and many others like them, illustrate the experiences that lie behind those names scrawled on the deed of sale and mentioned briefly in the Calhoun-Clemson family’s personal letters. Of the dozens of enslaved people that this project is currently researching, we know much about only a few. The details of most of the lives behind those names in the deed are not clear—but calling those names is important too. In recognizing the struggle and experiences, known and unknown, Call My Name aims to learn more about the people and lives that are represented by these names. For additional information on enslaved persons of African descent at the Fort Hill Plantation, visit the Clemson University Historic Properties site here.

If you have information about anyone in Generation 1, please reach out to us through the Contact page on this website.

New membership are not allowed.