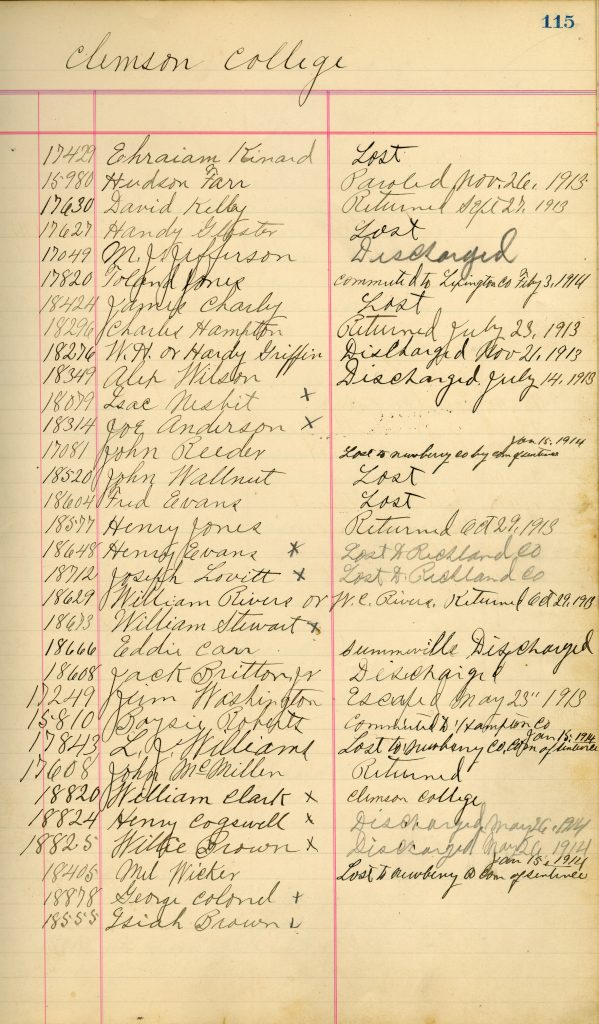 Page one of the first register listing the names of men and boys assigned to the Clemson College convict detail in August of 1890. Source: South Carolina Department of Archives & History, Columbia, SC.

When the South Carolina State Assembly established Clemson Agricultural College of South Carolina in 1889, they included a provision for its trustees to lease convicted laborers from the state penitentiary to help build the school. During the next twenty-five years, Clemson trustees petitioned the State Assembly repeatedly to lease state convicts to erect the college’s infrastructure. The practice of convict leasing had become widespread across the South as a means of exploiting Black labor for capital gain. Regarding comparisons between convict leasing and slavery itself, a southern delegate remarked to reporter Hastings Hart in 1919 that “Before the [Civil] war, we owned the negroes…If a man had a good negro, he could afford to keep him…But these convicts, we don’t own ‘em. One dies, get another.” Mostly Black boys and men, ranging in age from 14-67, were leased to work at the College, building the first classroom and administrative buildings, working in the fields surrounding the College, installing roads and sidewalks, and even constructing a dike. Call My Name has thus far uncovered the names of hundreds of convicts who were assigned to Clemson to complete this work. These boys’ and men’s stories and lived experiences illustrate not only the miserable living conditions in the stockades provided by the all-white College administrators but also the way that the convict leasing system—which was fed by over-policing of and criminalization of impoverished Black men and boys and the handing out of sentences that were far more severe than whatever crime was committed. This exploitative system influenced future forms of segregation and discrimination. 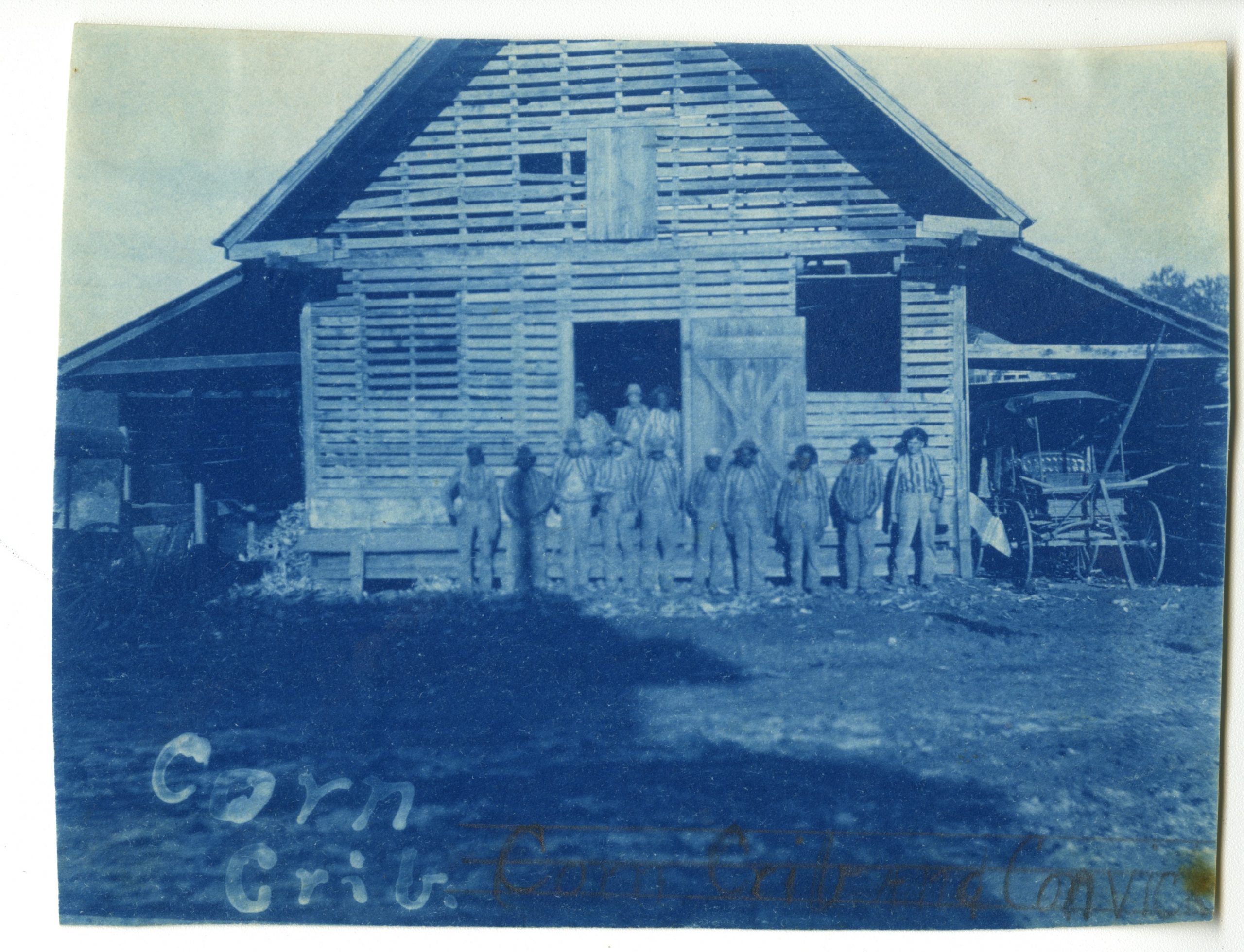 The system of convict leasing began in South Carolina shortly after the Civil War—though it had been present in other Southern states as early as 1844. The system worked by funneling mostly Black people into the state penitentiary by arresting them for minor crimes and handing out disproportionately large sentences; once incarcerated, they were then leased out to companies and schools for a relatively small fee. The organizations who leased the convicted laborers had little incentive to treat them humanely because there was often very little oversight from the penitentiary or the governor’s office. In Clemson’s case, South Carolina’s legislature and governors were comprised of white conservative Democrats, including Benjamin Ryan “Pitchfork” Tillman and many of his followers, who were elected shortly after Reconstruction ended and began to wield their power to perpetuate the system and even make it progressively more profitable for the state.

Thus, those who leased state convicted laborers had very little incentive to preserve the well-being of the prisoners. A comment from President Walter Riggs in 1911 suggests that ventilation was poor, and the convicted laborers were not given any clothes to sleep in. There are also numerous cases of convict abuse across the state at this time, several of which resulted in deaths from disease in infested barracks.

Despite the backbreaking labor and the unsanitary conditions of their housing, these convicted laborers exhibited resistance and resilience in the face of the power structures that were stacked against them. The state kept registers for the convicted laborers leased to Clemson, listing the names and prison numbers of the prisoners assigned there. The first page of the 1890 register indicates that at least eight convicted laborers escaped during their assignment. These escapees were often recaptured during the early years of convict leasing at Clemson, though the security was tightened in later years. Those who were recaptured often had their sentences lengthened or even restarted. The sheer number of escapees in the early years is a testament not only to the conditions inflicted on them but also their resistance to the injustices of the system that had sentenced them to years of hard labor for petty crimes.

One example of this cycle of incarceration and exploitation is Wade Foster, a boy who was convicted at 13 years old and assigned to work at Clemson. He was convicted of stealing around 6 dollars’ worth of boy’s clothing, a toy drum, and a pillowcase from his neighbor Virginia Caldwell’s home in Spartanburg County and pleaded guilty to the offense. For his crime, the judge sentenced him to six months of hard labor in the state penitentiary from October 19, 1891 to April 27, 1892, though he was released earlier than scheduled. Foster’s experience is not an outlier, according to the state records: the majority of the convicted laborers leased to Clemson were under the age of 25, and many were arrested and sentenced for some form of larceny.

Another example of resilience among the convicted laborers is George Shaw. At 31 years old, Shaw was arrested for “malicious mischief” in Edgefield County, South Carolina, and sent to the state penitentiary for six years at hard labor. During his sentence, he was assigned to labor at Clemson in 1890. After his release in 1895, Shaw remained in the nearby community of Calhoun, South Carolina, where he eventually purchased 100 acres of land and raised a family. He became a member of the local Abel Baptist Church, and his wife and many of his children and grandchildren remained in the area after his death in 1931. George Shaw’s granddaughter, Rosa Shaw Grayden, was hired by Clemson in 1976 and was later appointed to serve on the President’s Commission on the Status of Black Faculty and Staff. She retired in 2021 and has devoted her life to community activism, assisting Black families who are being adversely impacted by gentrification. George Shaw’s life and legacy speak to his own resilience and determination to survive even amid oppressive systems like convict leasing, Black Codes, over-policing, and later in life, Jim Crow segregation.

These two stories represent a small fraction of the hundreds of names on the state convict registers—and each name represents an individual whose own lived experience and story exists beyond the ink on the page and the basic biographical information provided about them. Call My Name is still seeking more information on these and other convicted laborers leased by Clemson College during this period by continuing to dig through the archives and reaching out to the local community, determined to find more documents about and descendants of the men and boys who worked on these work details.

If you have information about anyone in Generation 3, please reach out to us through the Contact page on this website.

New membership are not allowed.